#BREXIT isn’t far off, but Mrs. May’s plan crashed out during a vote in Parliament.

UK regions such as Wales, Northern Ireland and Scotland would have been entitled to a 22 per cent raise in support from the EU under the budget plans for the 2021-2027 period, up from the €10.6 billion or £9.3 billion that the UK receives in the current 2014-2020 budget package, according to the report, by a network association of European regions.

This funding loss will be most keenly felt in two regions: Cornwall and the Isles of Scilly, and West Wales and the Welsh Valleys. These are classed as ‘less developed regions’, and currently receive most of the UK’s regional funding.

The UK must not crash out with a #NoDealBrexit , it would be far better for one of these to happen:
1: #Remain
2: #ThePeoplesVote
3: stay in the #CustomsUnion
4: enter a #NorwegianStyleBrexit

To keep the UK as one, it must be better for the UK to #Remain 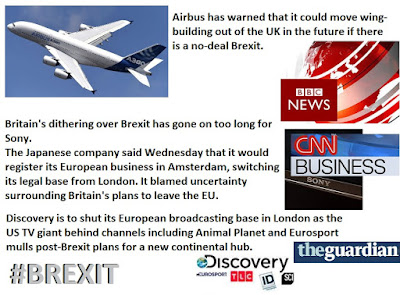 June 28, 2016
So the people on the UK have had the vote, to 'remain' in or 'leave' the EU... the vote was a close one to leave, which has caused no end of problems. The pound has lost value, companies have decided to ditch the UK and its workers and shift to other countries, Scotland want to go it alone and Northern Ireland wants to reunite with Eire and leave the UK. David Cameron is to stand down (....no real loss there then!), Jeremy Corbyn won't stand down from Labour even though he cabinet is jumping ship. One thing that Labour said during it's 'leave' campaign was that the NHS was to get an extra £350m a week... which they now say 'sorry this won't happen' a out and out lie from them then - which when people saw this made people vote Plaid Cymru leader, Leanne Wood said in Cardiff earlier today ' We have to hold the leave campaigners to the vow they made during the EU campaign, including an extra £350m for the NHS every week. We ne
1 comment
Read more

May 12, 2020
The Grumpy Old Git’s Guide To Life – Part 3 https://youtu.be/aYwJnABOiBo This is a great book that I discovered on Amazon. This read is all about those slimy things in your garden…. Mmmmm, slimy! #comedy #bookreview #reading #AmazonUK #Amazon #grumpy #old #VictorMeldrew #vlogger
Post a comment
Read more

Philip England
Hi I'm Philip, to friends, listeners to any radio shows I present and in some online parts of my life I'm known as Phil. I am on various social media platforms, my website has links to them, so why not check that out! Oh yes, thank you for dropping by